HOW IS AUSTRALIA THE WORTHIEST WHEN IT COMES TO IMMIGRATION?

HOW IS AUSTRALIA THE WORTHIEST WHEN IT COMES TO IMMIGRATION?

Australia is the finest and an elitist country to be in, both for study and work purposes. There is no other country with such class, opportunities, security, and scenic beauty. Australia has one of the best universities when it comes to education. Many universities have been ranked the best on a worldly basis.

The immigration is back on track now. Immigrants who are visa holders are now allowed to travel to Australia from the 1st of December, 2021. Covaxin has been added to the list of acceptable vaccines in Australia.

Other than that if we compare Australia to other countries, it is no doubt the platinum choice in each and every aspect.

1. The only country which provides 4 Years Post-study work visa:

Introduced on 16th November, 2019, the new visa rules allow immigrants to stay for years in the country’s regional area for work.

All the regional as in the tier 2 cities of Australia like Goldcoast, Perth, Newcastle, etc offer the best of facilities to the international students

It is an amazing opportunity for the ones who are planning to study abroad since 4 years are more than enough to decide your career plans and execute them in a way that you actually dreamed of without any hurry. A few top and popular cities such as Perth, Adelaide, Gold Coast, Sunshine Coast, Canberra, Newcastle/Lake Macquarie, Wollongong/Illawarra, Geelong, and Hobart now offer 1 year of additional PSW (total of 3 years).

Even though Melbourne and places like Sydney are already quite popular, but now Perth, Goldcoast and places like Adelaide have become a more prominent preference of the international students since the regional areas provide better work opportunities and a more peaceful space to live in without paying a fortune.

2. Better economy than any other country

Starting at 2021, Australia was the twelfth biggest public economy by ostensible GDP (Gross Domestic Product), the eighteenth biggest by PPP-changed GDP, and was the 25th-largest merchandise exporter and twentieth biggest merchandise shipper. Australia took the record for the longest run of continuous GDP development in the created world with the March 2017 monetary quarter. It was the 103rd quarter and the 26th year since the nation had a specialized downturn (two continuous quarters of negative development). As of June 2021, the country’s GDP was assessed at A$1.98 trillion.

The Australian economy is overwhelmed by its administration area, which in 2017 contained 62.7% of the GDP and utilized 78.8% of the workforce. Australia has the 10th most noteworthy all-out assessed worth of normal assets, esteemed at US$19.9 trillion of every 2019. At the stature of the mining blast in 2009–10, the complete worth added to the mining business was 8.4% of GDP. Regardless of the new decrease in the mining area, the Australian economy had stayed versatile and stable and didn’t encounter a downturn from 1991 until 2020

Apply to a school in Australia and get a CoE
Create an account with the Australian immigration authorities
Make sure that you have all the needed documents in digital format
Complete the visa application online
Pay the visa fee and get a TRN-number
Possible health checkup and interview.
Get your visa decision
Travel to Australia

4. The weather in the Australian provinces and territories stays quite warm and favourable

Due to the huge size of the country, Australia has several different climate zones. The northern section of Australia has a more tropical-influenced climate, hot and humid in the summer, and quite warm and dry in the winter, while the southern parts are cooler with mild summers and cool, sometimes rainy winters.

The weather in Australia is never in extreme, it’s always bearable and pleasant.

5. Australia has a lot of lakes and beaches. The beauty of nature in Australia is dreamlike

When you are in Australia, it is realistically impossible for a person to believe the beauty of it, it’s so dreamlike.

Whether you’re visiting for the first or fifth time, the natural beauty of Australia is guaranteed to blow you away. With pink lakes, vertical cliffs, and beaches crowded with kangaroos, the country’s landscapes are unrivaled. Even below earth’s surface, life seems to shine a little brighter Down Under.

6. Strong economic performance over the last decade, there has been extremely low unemployment, low inflation, and low-interest rate

The Australian economy is set to become the world’s 12th largest economy in 2021, up two places from 2019, according to the International Monetary Fund. Australia’s GDP will be around A$2 trillion (US$1.6 trillion). Australia is home to just 0.3% of the world’s population but accounts for 1.7% of the global economy.

7. Australia provides better job security than any other country

If you are skilled enough then there are barely any chances for a person to lose his or her job. Job security is one of the plus points of Australia. To have a secured functional job after studying is what every citizen or immigrant wants and to have that fulfilled is like a dream come true.

8. Australia asks for a lesser amount of income tax

In comparison to other countries, Australia asks for a lesser amount of income tax which is a great benefit for the workers since he or she will have to pay a lesser amount of share from their salary or income and have more left for themselves and who doesn’t want to save money or to spend more on themselves?

9. To cover immigrants healthcare, Australia has robust services and they are quite easily and fairly accessible

Not only does the Australian government provide healthcare but they also try their best to make it as accessible as possible for the immigrants. Healthcare services are one of the most important things required for the survival of any person and to provide it in abundance and ease is amazing. 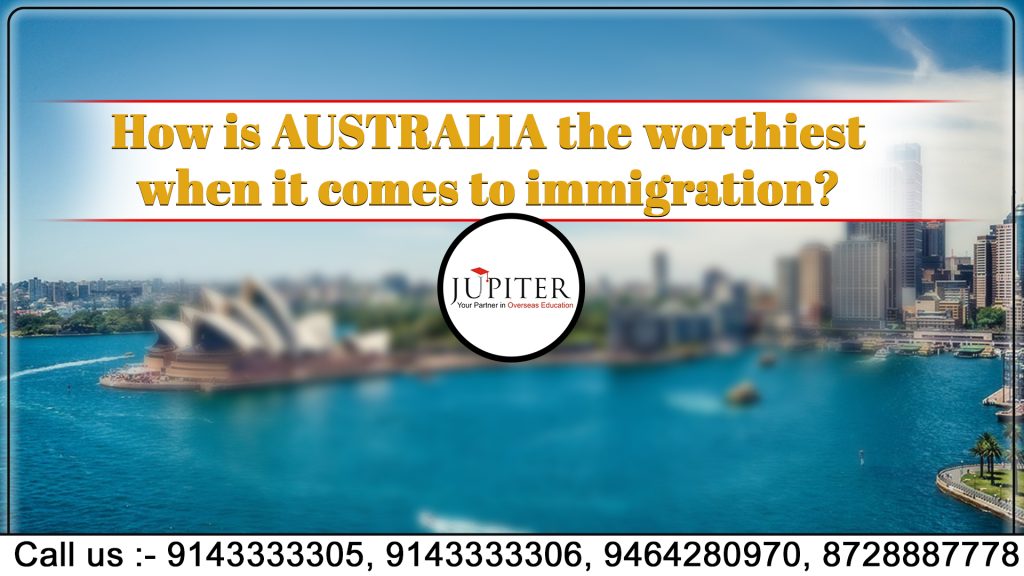